Ah, newbies. As the seasons change, you’re bound to see plenty of newcomers to the world of online poker. A lot of articles talk about the rise of “fish” during the fall season, making seasoned players hungry to rip a few chips away from the uninitiated. Thank heaven for clueless newbies, right?

Well, maybe not. More and more people are coming online to play real money poker after spending time in land based casinos or in fierce home games. It’s no longer fair to look at someone that’s new with very little info in the system as “easy pickings”. You might be surprised when they sit down to the table and can play with the best of them.

Online play, in our experience, is extremely loose in some places and tighter than others. Instead of just assuming that all newcomers are going to be easy targets, you’re really better off thinking about how you’re going to take them out as a fair competitor, rather than mindless prey. 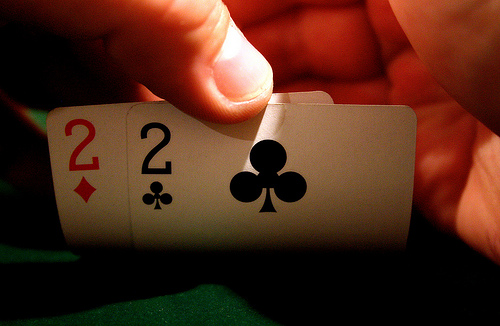 When you see your fellow table members are rivals that are worth fighting, you take them to a higher level. You don’t really want to play against someone that’s just going to fizzle out fast. Most long time poker players actually love the rush of playing well, getting chips off of a player that’s truly skilled. Sure, donk moves lead to chips in your pocket, but they don’t lead to memories.

We play online poker for the thrill of it, and we’re in good company. If you want to see everyone as a worthy opponent, then you’ll make far more money than underestimating everyone you come across.

Good poker theory and habits should be in play all the time. We’ve seen plenty of people assume that the other people at the table were fish, only to find themselves out of the bankroll that they worked so hard to establish.

We really see these bad habits come to the surface when different tournaments come up. People barrel into them, thinking that they’re going to mow down the field and take the top prize with ease. Unfortunately, that’s not how it goes down. Usually the players you think are weak in the beginning are just playing looser than they normally would. Don’t ask us why, but people think loose play in a tournament is best because it stimulates more action on the table. After all, no one really wants to play with a rock, right? Right.

Think beyond the usual “fish” mentality. See your opponents as being worth pursuing the right way. That type of thinking won’t steer you wrong as the stakes get higher. You didn’t think that all new players stay in the micros, did you? They go into high stakes games all the time. So don’t assume you can get away with underestimating them, or you won’t be able to play at bigger tables for very long!