Almost every player in poker at some point wishes they had pocket pairs, no matter the rank. A player has a 1 in 17 chance of getting a pocket pair, hence the reason they are so coveted.  However, having pocket pairs is one thing, using them to your advantage is a completely different story, but you are just about to read it. If you do not know, small pocket pairs are pocket sevens or cards of lower numbers. Although any small pocket pair can look good, a small pocket pair should be approached carefully since playing the right pair depends a lot on the table position at hand.

At the pre-flop position, your small pair can be the best hand at the table but after the flop the odds change substantially as the cards hit the board if you did not hit your set at the flop. Is raising the pre-flop with a small pocket pair a good idea? The answer is yes if the player’s position and other players’ bets happen to be right. 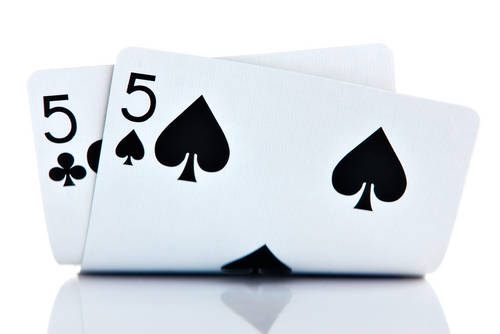 When seated with a pocket of 4s in an early position, it is wise to let other players take later position as they might decide to raise with better starting hands. It is not wise to raise just before an opponent re-raises before the flop as you could lose significantly.

When no other player acts before you raise and one or two have called, it is advisable that you raise about 3 times the big bind to thin the playing field and to keep the blinds from limping in. Your pocket pair should be considered the strongest hand on the table and will work to your advantage since 2 over cards on the flop gives a 49% chance to your opponents.